Karim Adaimi admires the resilience of the Lebanese people. Here he explains how to face life’s challenges with action and positivity.

On August 4, 2020, Karim Adaimi was excited to be embarking on a new adventure as he flew from his home in Lebanon to Barcelona to begin his MBA at IESE. He landed to dozens of messages waiting for him from concerned friends and family all over the world. While he had been airborne, ammonium nitrate stored in the Port of Beirut had detonated, causing one of the largest explosions in history, killing more than 200 people and leaving 300,000 homeless.

“Imagine your hometown, your special places, all gone,” he says. “Whole neighborhoods, beautiful parts of the city, three hospitals, were lost.”

He felt torn, having literally just arrived in Barcelona to commence a two-year program, yet immediately wanting to be home alongside his compatriots, helping to clean the streets and pick up the pieces after one of the most devastating days in his country’s history.

Two years later, Adaimi is a proud advocate for “the beautiful country of Lebanon,” so much so that in March 2022 he gave a TEDxIESEBarcelona talk titled “Beirut will rise again” on how “the strong and resilient people of Lebanon will work together to overcome the trauma of the port explosion.” Throughout his time at IESE, he took positive steps both to provide practical help and to introduce his fellow students to the unique character of his homeland.

Rising from the ashes

Things were not easy for Lebanon even before the 2020 explosion. The Lebanese pound had lost 95% of its value since 2019, and inflation surpassed that of Venezuela at one point. People lacked access to basic resources like healthcare and electricity, with power cuts a frequent occurrence. There was little faith in the government; indeed, it was years of government mismanagement that was blamed for allowing such a dangerous quantity of explosive chemicals to be stored at the port in the first place. The arrival of COVID-19 only exacerbated these economic and political hardships.

While not downplaying the problems, Adaimi sees much to be hopeful about in how society tries to overcome them. A born optimist, he has participated in the Scouts for most of his life, which has affirmed his belief in the small community unit banding together to get things done.

“Take the explosion,” he says. “The next day, there were 500,000 people out cleaning the streets. My mother, who works in a hospital, wasn’t working that day but rushed straight to work anyway. She was in such a hurry to help that she forgot to contact me to say she was okay! Most of those helping went as part of small groups: neighborhood associations, my Scouts group, the Red Cross, Caritas. You can start small and still make an impact.”

Regarding the power cuts, people are working on creative solutions. Typically, the government provides a certain number of hours of electricity a day and community generators make up the difference. However, as the number of government-provided hours has dwindled to fewer than six, the community generators can’t keep up. Imagine, fridges and air conditioners no longer working in the stifling heat, as well as the things you least expect. The Lebanese writer Charif Majdalani described his distress at “the impossibility of raising the electric blinds on the windows … like a symbol of the dark pit in which we are now all trapped.”

But necessity is the mother of invention. So, people got hold of batteries to store electricity from what was provided daily for sharing later, while others installed solar panels. “To be clear,” Adaimi says, “none of this is ideal, but it’s a start.”

Adaimi organized some community-level contributions of his own. Twice during the MBA, he spread the word among his classmates to donate their excess medicines, which were collected and sent to Lebanon in partnership with the charity Medonations. “I told everyone that even if they had just one tablet left in a box, it all helped.” Their second medicine drive was not quite as big as their first – but that was because they had less time to prepare. “We were in a hurry because we were all going to Lebanon!”

There was never any official IESE trip to Lebanon planned. Instead, Adaimi had been hoping to take a few friends to his country but kept putting it off. “It wasn’t the right time,” he recalls, “but then I figured it would never be the right time and we should just go.”

Initially, seven people from his MBA team were interested. “I asked the other Lebanese students if they wanted to come and invite their friends, too. The next thing I knew, there were 80 people signed up!” Adaimi and four Lebanese classmates – Garine Arabian, Ali Moghnieh, Jessica Saade and Jennifer Zouein – got busy planning the trip.

Adaimi describes himself as someone who enjoys creating order out of chaos, but for this trip he had his work cut out for him. “Two days before we left, the government declared bankruptcy and said credit card payments would no longer be accepted. Cash only.”

Quickly, they organized cash and bank transfers for 80 people, as well as transportation and meals. “Obviously, just going to eat is logistics, not just because of the numbers but with the electricity cuts, you don’t want anyone getting food poisoning.”

But such travel adventures make the best stories, and the trip was a success. Adaimi was able to introduce his friends to the natural beauty and cultural heritage of the ancient Mediterranean land. He likes to think he was doing his bit for the economy as well. “Eighty people, from all over the world. We were even on the news.”

In the face of all these challenges, what does Adaimi believe helps people stay resilient and strong? “Instead of dwelling in despair, you need to seek alternatives. Look for the quickest way to change things and find a way out of the immediate crisis.”

“Then, unite with others. Take charge of the changes you can manage. It might not transform the world, but it’s a start. Mobilize your circle and give back with generosity.”

“Finally, laughter is the best medicine. The Lebanese are known for their resilience, but I think it’s because we love to live. We never stop enjoying life. Even when your own life seems to be all deadlines and being busy, remember that working hard, though important, isn’t the whole answer. You also need to know how to enjoy the process.” 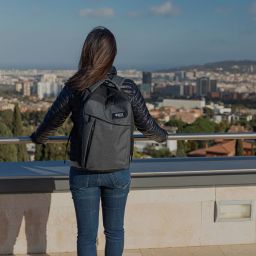