Human development is at the heart of the work of the award-winning economist and philosopher Amartya Sen. Speaking with IESE's Marta Elvira, Sen underscores the importance of learning and communicating for advancing society. 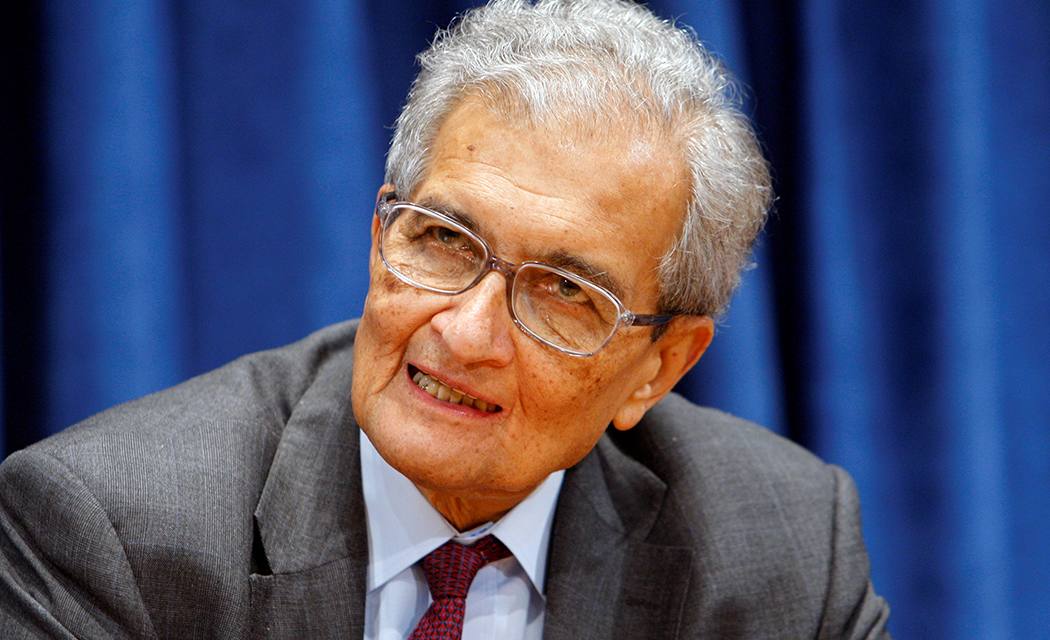 Amartya Sen photographed at the launch of the 2010 Human Development Report by the United Nations Development Programme. Princess of Asturias Awards.

Born in Bengal (now West Bengal, India) in 1933, Amartya Sen received his PhD from Trinity College, Cambridge, where he later became Master. He is currently Thomas W. Lamont University Professor and Professor of Economics and Philosophy at Harvard.

Indian economist and philosopher Amartya Sen needs little introduction. His theories of human development and the underlying mechanisms of poverty and famine have contributed to the global fight against injustice, inequality, disease and ignorance. His contributions to welfare economics earned him the Nobel Memorial Prize in Economic Sciences in 1998. His thinking has inspired policies at the United Nations, Oxfam and the World Bank, and informed the work of other Nobel Laureates. In 2021, he received Spain's prestigious Princess of Asturias Award for Social Sciences. On that occasion, IESE's Marta Elvira spoke with him about the concepts that have driven his life's work and educational mission. Here we present excerpts from their conversation.

Development as Freedom, the title of your 1999 book, is such an important concept of yours. How does "development as freedom" differ from other approaches to development?

"Development" has often been conflated with the growth of GDP. But a country could have high GDP growth and yet not have the kind of satisfactory performance for other aspects of human development. We do want higher incomes, of course, but not only higher incomes. We also want better educational facilities, better healthcare, better communication with each other, better literature, better art, and all the other things that make life valuable.

My reference to "freedom" is an attempt to capture that broader notion of development, in contrast with the usual, narrowly defined economic goals. This freedom is an ambitious goal, because it includes many things relating to developing our human capabilities, such as freedom from illness and freedom from illiteracy, the advancement of which is good for individuals as well as for the societies in which those individuals live.

In terms of measuring development outside of the narrow scope of GDP, nowadays we have a lot more data availability. How useful are that data for enriching traditional models of development?

What we know about a collectivity of people depends on a detailed understanding of what they do. Is there a lot of crime? Is there illiteracy? Are people often arrested without justified cause, as happens in authoritarian regimes? Together, these things form a totality of concern. So, the issue of data is central.

When we don't have such data, it makes it very difficult for us to form a judgment about that society. Conversely, any broadening of the data will help us to learn more about a society and, ultimately, more about ourselves, to really understand what is going on in the world and to try to improve conditions.

That speaks to why international organizations have used your work to help measure and set goals for human development -- namely, the U.N.'s Human Development Index and its Sustainable Development Goals -- which go beyond purely economic progress to other matters of realizing human capabilities. This leads me to my next question on the value of learning and education, which has been fundamental to all your work. How do you view the incentive toward learning -- crucial for personal as well as economic development, as you note -- in a future where jobs may be automated and scarce?

Many decades ago, we ran night schools at the edge of some settlements in India. In those days, people had very little opportunity for education. There were no schools. It really was a vacuum. We would go out around 6 or 7 o'clock with some lanterns and we had the boxes from international aid organizations that food shipments had come in. We used those boxes as chairs and tables. We were aiming for success. And while we didn't always achieve it, it was very rewarding when children managed to learn the alphabet, how to compose prose and to do elementary arithmetic. It was satisfying to feel like you had been instrumental in that. In many ways, the credit belongs to human beings' facility for learning. It's remarkable how malleable that human capability is, given the right conditions.

When I was in school and running schools myself, what struck me was that the incentive to learn comes quite quickly in an endogenous way, from inside you. We see that when people can read and write and do arithmetic, they are not as afraid of being deceived. An incentive structure may be connected with getting a job and earning an income, but it could also be connected with an inner compulsion: It's what we want to do.

You mentioned earlier that we want better art and literature. Yet, there is, at least in some societies, a decline in the prestige of the humanities. Do you think the humanities should be taken more seriously as a tool for social change?

Yes, indeed! The arts and humanities complement what might otherwise be a more scientific approach to life. And quite often it takes a political form. When you look at a piece of art like Picasso's Guernica, for example, it teaches you something without the need for words, because that is how human communication works. So, broad learning and education in the arts and humanities could definitely help effect positive social change.

To what extent have the humanities influenced your own ethical and political reflections?

Philosophy addresses universal questions that have come up time and again in the minds of all people, whether it be Euclid or Aristotle from ancient Greece, or thinkers from other countries, whether Spain and Portugal or India, China and Japan. Spain, for example, has benefited from its own ancient tradition and Western tradition, but also from the influence of Islam and the Jewish communities that came to Spain, each making their own contribution to ethical considerations. These different philosophical perspectives allow for a richer understanding of the human being within different economic and political systems.

Likewise, economics can inform moral perspectives. For example, early Muslims -- not conquerors but traders -- came to the east coast of India and brought some of their own understanding of the nature of the world to the region. In India, such interdependence is central to human learning, yet how easily we forget the way culture and civilization have moved from one country to another. We have reason to be grateful for the human capacity for migration and for conversation.

What are your thoughts on the current strain of populism, which often takes aim at migration and the free movement of people across borders?

Much progress has come from people traveling. If the United States has been successful as an economy, a lot of that is connected to it being an immigration culture. Spain, generally, has been kind to immigrants, and you see that also in the history of the country.

Sometimes, issues arise, like if you have a large number of immigrants, you might feel that the domestic opportunities are hard to create. It's a question of making a judgment. These things are not stationary. There are problems that one has to address. But the world is one rich civilization with many parts, and immigration can be a great source of broadening the world.

In your work, you place a lot of emphasis on conversation between different peoples. This is a theme in your new memoir Home in the World. And yet, with the internet and Twitter debates, we have seen how conversation has the capacity to divide and erode trust in our democracies.

The 19th century British economist and philosopher John Stuart Mill observed that democracy was governing through discussion, not just voting, which comes after discussion. Whether you are conservative, liberal or independent, the underlying compulsion for democracy is a genuine need to talk with each other.

Many years ago, I wrote that no famine has ever taken place in a democratic country. As long as speech is free and people can talk to each other and elections exist, you won't have people dying of famine. Why not? Famines very rarely affect more than 5% to 15% of a population. But if people are dying because of bad governing, what may have begun with a small minority of people affected directly by famine can turn into a large-scale revolt involving 60%, 70%, 80% of the population. That is because of discussions, commentaries, poetry and art which move people to see the suffering and shameful injustices.

We need to learn that, so long as parties remain at the table, willing to have a conversation, and so long as one human being takes an interest in the life of another, democracy will continue to exist in our societies as a preventive force against various types of evil.