Astrophysicist Neil deGrasse Tyson: "Never trust atoms because they make everything up"

How to use humor, dignity and respect to reach people as a leader. An enlightening talk with star astrophysicist Neil deGrasse Tyson, interviewed by IESE's Bill Baker. 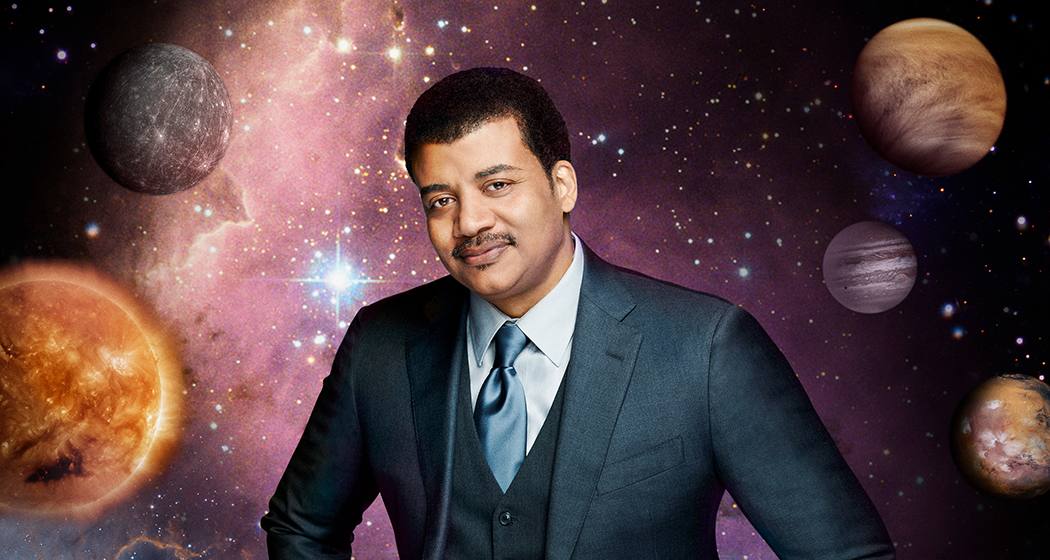 Astrophysicist Neil deGrasse Tyson's leadership style is refreshingly down to earth for someone who spends his life gazing at stars.

With his trademark wit, the American astrophysicist, planetary scientist and bestselling author Neil deGrasse Tyson has a knack for popularizing arcane subjects. At the recent FRED Leadership Forum, he sat down with IESE's Bill Baker, the veteran public broadcaster and author of Organizations for people: Caring cultures, basic needs and better lives, to discuss mindful leadership. When we think about cerebral, star-gazing scientists, we may rarely think about people-focused leadership. Yet as director of the Hayden Planetarium at the American Museum of Natural History in New York, Tyson does a lot of leading and reading of people. Here, the pair discuss how leaders can use humor, dignity and respect to reach people where they're at and expand the limits of their universe.

Bill Baker: So tell me, is leadership an art or a science or both?

Neil deGrasse Tyson: Leadership has many different dimensions. There's a Pied Piper sort of leadership, where you offer people a cool idea and they follow you because they want more. There's leadership which is about bringing out the human potential in your team. And there's the authoritarian leader who says, "I'm the leader and you have to do what I say." Personally, I don't like that authoritarian, hierarchical approach -- not that it doesn't work. As we all know, some of the biggest leaders of the 20th century used it to devastating effect.

One of the things that came out of the research for my book was that the leaders who enjoy long-term success tend to be kind leaders.

Well, in my field, we're generally not rewarded for our social graces. There's an unwritten rule of "I'm right and you're wrong," "You're right and I'm wrong" or "We're both wrong." It's very rare where we differ and we're both right. In science, leadership means having ideas that others don't have. No one ever wants to do what someone else says simply because they say so, and if we don't agree, then we have to keep at it until one person says, "Oh, I never thought about it that way before!"

As a practical example, our research papers don't carry the academic pedigree of the author. A grad student or an intern will be listed alongside the director of the observatory with no title following, because we never want to squash anyone. Even though a new person is going to have to learn the ropes, there's the implicit expectation that they might be smarter than you. If you set up a system that's hierarchical, you'll never gain from this. This reminds me of the adage, "First-rate people hire first-rate people. Second-rate people hire third-rate people."

It really does make you wonder whether that sort of attitude to leadership couldn't be copied in other industries.

Here's another example: We have some very senior members -- the most trusted, best known among us, whose research is highly respected. But they're respected not simply because they're older but because they've seen institutions thrive and suffer, and they bring that wisdom to the table. They're not biased or self-serving; they hold the interest of the community above anything else. And when we have something new that we want to fund -- a spacecraft, a telescope or a very important piece of equipment -- but limited funds, we go to a senior review committee and they choose when to shut off the spigot and redirect funding elsewhere. People's careers may be adversely affected by this decision, but because the senior leaders chosen to be on this committee have earned everyone's respect, nobody fights it.

That's how you know you've got a good system: A true leader will still get people's respect even if the decisions the leader makes are hard for them. As someone who has managed to engage people, tell me more about how you do it.

It happened over 20 or 30 years. Whenever people discovered what I did for a living, they would barrage me with questions: "Tell me about black holes! Tell me about the Big Bang!" And I would monitor how they responded: Were they leaning in or getting bored by my answers? I would take mental notes of what interested people -- which should be the goal of any educator.

Then, in 1994, a TV news crew came to our planetarium to ask me about the discovery of a planet orbiting a star, and during the interview I did a little body jive to illustrate the Doppler Effect. The only thing on the news that evening was me doing the dance. That taught me the importance of the soundbite. I started practicing in front of the mirror. I'd get my wife to shout out cosmic phenomena: "Black holes! Space time! Einstein!" And I would practice giving a three-sentence reply that would be informative, interesting and maybe make you smile. So, for black holes, I might say, "First, avoid them!" which is scientifically accurate but also makes you smile. I find that when people smile while they're learning, they come back for more, because it's a good feeling. If you can master the anatomy of a soundbite, then you're more likely to get listened to.

It seems simple but a lot of work goes into it. How many politicians have you see on TV that act like deer in headlights? When I first appeared on The Daily Show with Jon Stewart, I timed how many seconds he gave his guests to speak before he jumped in with a comment, and I parceled my information into those units. You really have to do your homework and invest in your delivery.

There are other equally great scientists out there that nobody has ever heard of because they haven't mastered this ability to communicate with everyday people in real terms like you do.

People know when you're not real; they know it and feel it. When I became host of the TV series Cosmos, I was asked how it felt to be in the shoes of the original host, Carl Sagan. I said, "If I try to fill his shoes, I can only fail, because I'm not him. But I know I can fill my own shoes perfectly. I'm not here to try to be Carl Sagan. I'm here to be me. If I fail, then that's on me. I'm not failing for having failed to be somebody else."

So, be yourself. And try to connect with your audience. As an educator, you can either lecture or you can communicate. A lecture is when you're facing the blackboard, just writing on the board without much concern for your audience. In a university setting, people may connect anyway because they've paid a lot of money to be there. But in the real world, people can just walk away; the contract between you is different.

One thing I do to connect is to expose myself to the common language of pop culture. So, I look at the latest movies, the latest TV shows, the latest pop stars that people are talking about, and I try to have some fluency in that language. If there's a Beyoncé song that relates to something I'm saying, I can pull it out, and all of a sudden this content, which would otherwise be obscure and distant, becomes near and relevant.

You have to be constantly adapting to your audience. Take Twitter: For me, Twitter is a neurosynaptic snapshot of how people think about things in real time. I'm there not to fight against what people are saying but to engage with the world as it is unfolding, so that I can navigate that shifting landscape and still get my message across.

What about when you have to say something that your audience is not prepared to buy? How do you get your audience to the place where you want them to be?

I can only partially answer that from what I learned from my father, who spent his entire career in city politics: It's not good enough to be right; you also have to be effective. We all know people who have a great idea, and they quit their job because they say no one will follow their recommendations or they blame the inertia of the organization. But being effective means: "I have this brilliant idea. Now people need to be convinced. There has to be a pathway, and if I don't provide that path, it's my fault if my idea doesn't get funded." The burden on making an idea work is always on the person who is trying to make it happen. Is leadership about the art of persuasion? I prefer the art of enlightenment.

But how do you persuade or enlighten people, with dignity and respect, when they're coming from a place of magical thinking? We see this with vaccines and the non-scientific attitudes toward COVID.

If people are deeply steeped in a magical belief system, it's a matter of finding a path for them to land in some kind of rational place. What are all the ways they have ever thought about the problem, and how can I give them another one that could help guide them? I once met a person who didn't think the moon landing was real, and I said, "So you think we didn't visit the moon nine times? Let's think about that." If he doesn't think we did it the first time, does he also believe we haven't done it all the other times since? The trick is to give the person something just a little bit beyond the edge of their current thinking. It's easy to say things that divide people. I look to leaders who are able to say things without anger, who are still ready to have conversations. Those are the leaders I try to emulate.

How do you nudge people in the workplace context?

If there's someone who is struggling, I like to give them assignments that are just incrementally beyond where they are; again, just a little beyond the edge, not so much that they'll fail, but just enough to sustain their confidence. For me, these are the roots of workplace dignity. There will be people who say, "I'm not paid for this. It's outside my job description." In that case, I don't know how else to show that you have potential that you can rise to, because the only way you can really justify promoting someone is if they go beyond the limits of what you hired them to do.

Would you say that your style of leadership is about taking risks on people, stretching their capabilities and getting them to explore their full potential?

Absolutely. Just imagine if everyone in the world were employed to the full extent of their abilities overnight! If you're not going to take risks on people, then you have no business being a leader. If I can get someone to a brand-new place, where they open their eyes and say, "Wow! I never thought I could do that," that's a good day.

A version of this article is published in IESE Business School Insight 160.