A safe simulation to help slow a pandemic's spread

A new analytical tool sheds light on what does and doesn't help promote compliance with public health measures. 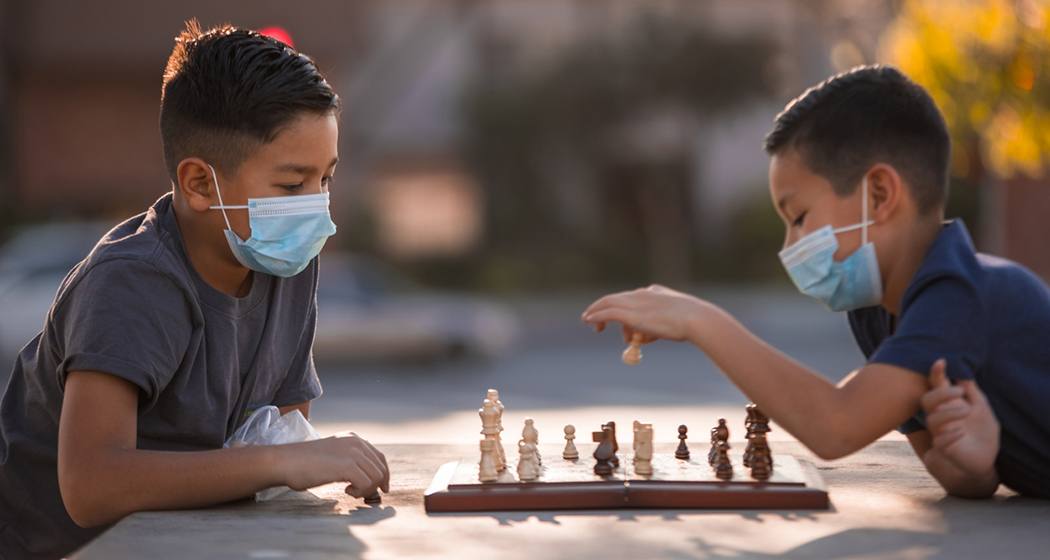 The "transmission game", a new tool that identifies formulas to encourage compliance with public health measures.

Putting vaccines and politics aside for a moment, let's unpack a game. By playing online, participants can win money if they don't get "infected," but the game's real objective is to find out how policymakers might encourage people to wear masks and practice social distancing to limit the spread of the current pandemic — or the next one.

It's called the transmission game, and it's an analytical tool to test the effectiveness of five behavioral interventions in a simulated outbreak, as explained in new research by coauthors Jan K. Woike, Sebastian Hafenbrädl, Patricia Kanngiesser and Ralph Hertwig, just published in Science Advances. Mapping a few key elements of the pandemic onto this game, and running two experiments with actual participants, the outcomes indicate that each intervention's likely results vary substantially — without actually putting anyone at risk in the process.

What worked best? Messaging with a moral component came out on top. Meanwhile, simulating and graphically depicting virus-transmission risks also had positive outcomes. Perhaps surprisingly, communication that focused on the actions of others (e.g., describing how often others were wearing masks) prompted greater risk-taking and negative consequences in the experiment.

Since early 2020, scientists have learned a lot about how COVID-19 spreads and how to help flatten the curve of a potentially exponential outbreak. At the same time, an x factor throughout much of the unfolding pandemic — with its rule changes, politics and new variants — has been human behavior.

Simply put, scientific evidence shows that social distancing and mask wearing help limit the spread of the virus. However, these measures pit individual self-interests — the wish for a social life, the discomfort of wearing a mask all day — against the common good. A key component of how individuals make decisions weighing individual and collective consequences is their perception of risks.

Human beings are notoriously subjective in their risk assessments, as they are influenced by personal experiences and cultural values. But communication plays a strong role, raising the question: what kinds of interventions work best to reduce risk-taking for one and all?

Hafenbrädl and coauthors set out to answer that question in an apolitical setting, with no mentions of masks, mandates or other hot-button topics. The team devised a safe and neutral game that maps three key elements of the pandemic:

1. The virus's potential for exponential growth, which many may fail to grasp in concrete terms (i.e., infecting just one person today may lead to a whole wedding party falling ill next week).

2. The social dilemma that individually advantageous actions (e.g., not wearing a mask) heighten risk at a collective level.

3. The compounding of small transmission risks as time goes on.

Is it worth turning purple?

In the game, 100 players start out blue (healthy), and then 8 players are randomly selected to turn purple (infected) in an initial outbreak. Once the game starts, no one can be sure of their color as they move forward. In each of 25 rounds of the game, players then choose between two actions, G (playing it safe, meant to represent mask wearing or distancing, for a possible reward of 8 points) and H (taking more risk for a possible reward of 40 points). Players who are randomly paired with a purple player (unbeknownst to them) then have a higher chance of turning purple themselves, with that chance influenced by whether they choose G or H, with transmission possibilities ranging between 0.05 and 0.25. In the end, blue players are the only ones to receive any monetary rewards. That is to say, when more players are infected overall, fewer receive payouts.

In a control game, a significant group of players were happy to embrace risk round after round. Specifically, in 36% of all selections, the higher risk option H was chosen, and 63% of players were "infected" by the end of the simulation. In a second game (Study 2 below), the authors then tested the results of five interventions meant to show the realities of risky behavior in five ways:

1. Observing behavior (descriptive): Players are made aware of what other participants are doing in terms of risk-taking. This kind of descriptive information may positively affect those who want to conform with the majority. However, others may feel justified joining the minority who refuse to conform. And so it proved in the game. Here, risk-taking increased to 46% (compared with 36% in the control) and infections to 73% (compared with 63% in the control), the highest risk and infection rates seen in the study.

2. Learning from others (vicarious): Players are exposed to the outcomes of previous participants' games. This kind of vicarious learning is akin to following nations' infection rates in newspapers, along with knowledge of their lockdown policies. Interestingly, this intervention did not slow transmission rates either. On the contrary, learning from others actually increased the incidence of risk-taking in the game to 44% and resulted in 71% infected.

3. Simulation: A simulator tool enables players to preview possible outcomes to risk-taking before they commit to action. For those who are not as familiar with the outbreak dynamics, the simulation is a teaching tool. This intervention lowered risk-taking to 34% and infections to 60% in play.

4. Chain of infection: Like the simulation method, this is meant to boost players' ability to make informed decisions. Players see a tree diagram depicting how early risk-taking can have a cascading effect and cause many others to turn purple over time. With this, risky behavior declined to 30% and infection to 57% in play.

5. Messaging (injunctive): Messaging with a moral component — for example, "stay home, save lives" — emphasizes the impact of lower risk-taking on others. In the game, participants have risk-taking consequences explained to them, and play beneath a sign reading "Choose action G to protect your and other players' bonus money." This was the most successful intervention by far, with 19% opting for higher risk and only 43% infected. 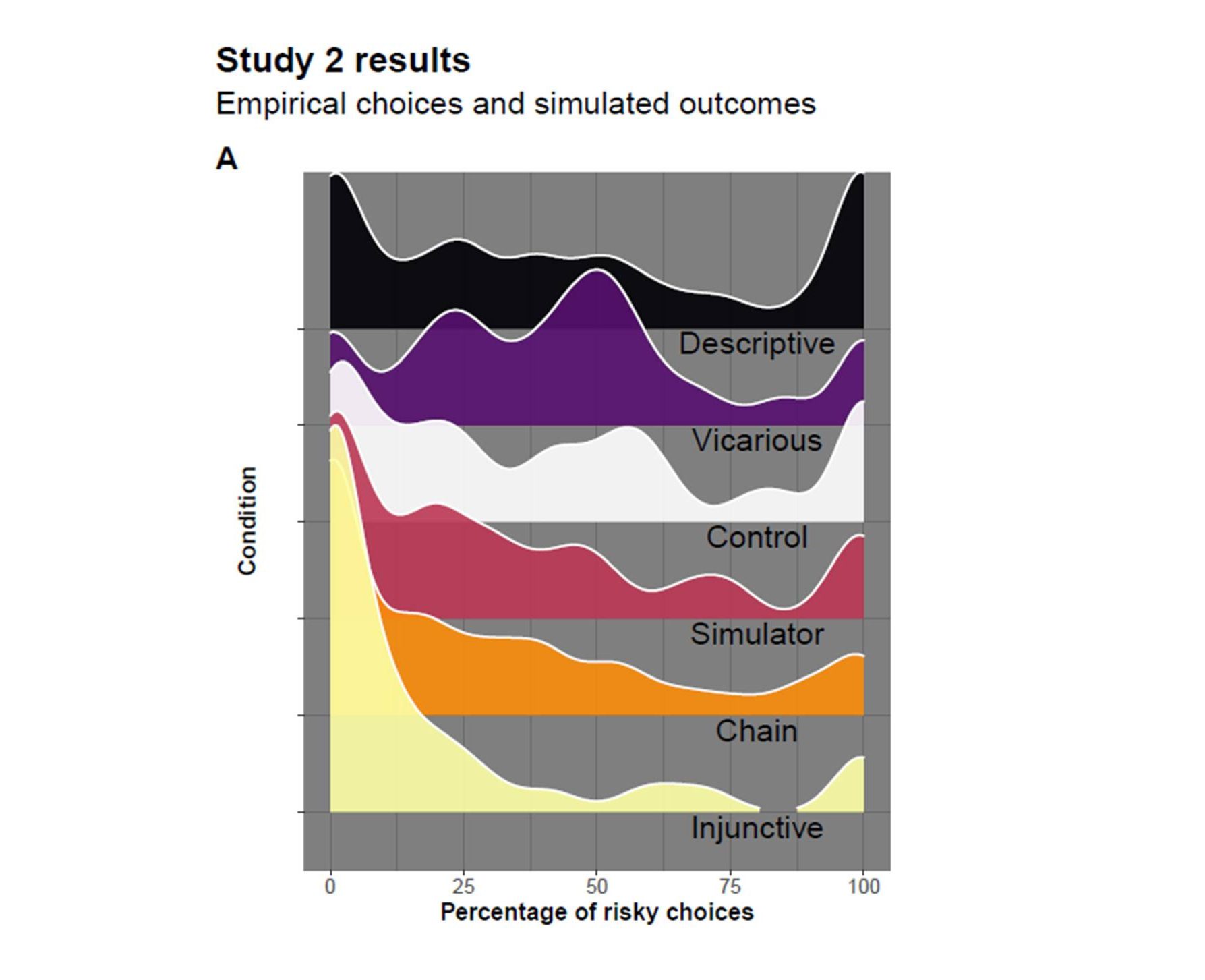 The results also suggested that at least 1 in 20 always opted to risk themselves and others in pursuit of potential personal gain, and at least 1 in 10 always opted for the safer option. That said, there was also a significant swing group of approximately 1 in 3 people that could be dissuaded from taking risks, given the appropriate intervention. And nothing was as effective as a clear rule combined with a compelling social reason for following it. Knowing this can have real-life consequences: slowing transmission and reducing the burden on health systems.

The transmission game described above was configured to study nonpharmaceutical interventions in a pandemic — e.g., wearing masks and keeping a safe distance. But the coauthors note that it could be adapted to focus on the particular psychological or economic factors that may be key to convincing more people to get vaccinated, for example.