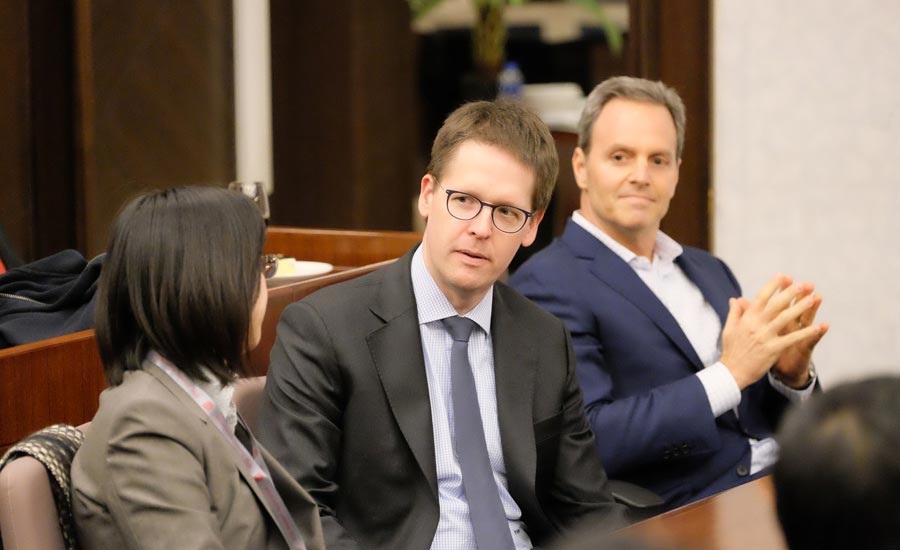 Trusting in people both employees and consumers and innovating locally without losing track of one’s core brand and strategy, are the keys to a companys success, particularly in a fast-evolving, increasingly competitive market like China.

That was the message from Glen Walter, CEO of Coca-Cola Bottling Investment Group China, in a speech in Shanghai this week to IESE alumni and students at the China Europe International Business School (CEIBS), IESE’s partner institution.

The secret ingredient is not what’s in that red can. It’s about people, Walter said, stressing that motivating staff to have what he called the 3 Ps passion, perseverance and a sense of purpose is fundamental to Coca-Cola’s business in China, its third largest market.

If we want to grow our business, the only way to do that is growing our people and our capability, he said, adding that in this respect Coke has much in common with IESE, whose Dean, Franz Heukamp, opened the event by highlighting the business schools recent moves to expand its staff, with ten new recruits, and place new emphasis on the use of technology in coursework.

Walter said that creating a sense of belonging to a much bigger family, a support unit that wants to see you succeed, encourages people to think out of their comfort zone and innovate. He said this is particularly necessary in China, where not only are local competitors becoming more formidable, but also, at risk of stereotype, many of my teammate’s first reaction when we first came forward and encouraged them to take on new experiences or projects, was I’m probably going to fail at that, to lose face.

What isn’t a secret is Coca-Cola’s success in China over the past three decades. What Dean Heukamp called probably the biggest brand in the world, was, Walter noted, one of the first American businesses to re-enter China in 1979, after Beijing and Washington re-established diplomatic relations. Today it has over 45 plants in the country, and Walter noted that nine of the company’s 20 billion-dollar brands are now established in China, the world’s biggest market for Coca-Cola’s Sprite brand.

And despite the recent slowdown in China’s economy, which has seen profit growth slow, Walter said the company is still committed to further investment, and remains very very positive about China’s potential, as the nation shifts from infrastructure-driven investment into consumption. Men and women are eating out more, engaging in cinema more, travelling more, going to theme parks more. That’s the core of our business model.

However, he said the rapid growth of China’s homegrown consumer businesses means the company can not afford to be complacent: After my short four years in China, if I go to a local convenience store or grocery store now and look at the local competitors, their capabilities in those four years have grown exponentially, he said.

Keeping Up With a Fast-Moving Market

According to Walter, this has produced a double challenge for leaders at a company like Coca-Cola: the need to innovate to keep up with such nimble competitors, while retaining one’s own focus.

In China especially, the pace at which [the] competition is innovating in the market [means] it’s very easy to lose sight of your strategy, he said. But at the same time you don’t want to cling on to it so tightly that you miss an opportunity. So I think of our business model as: 70-80%, we look at [the market] as a global beverage company, and leverage from consumer insights and best practices around the world; and then the [other] 30% should be what weve got our antennae up to try to understand.

Noting that 600 million people in China have never tasted Coke one of the saddest things I’ve ever heard, he laughed Walter said there is still a huge opportunity to drive our core business, to get Coke penetration; but the other opportunity is slightly modifying the core to meet the local consumer. It’s not a one size fits all.

In China, where dairy-based drinks have a significantly larger share of the beverage market than carbonated drinks, this has meant developing Minute Maid Pulpy, a popular milk and fruit drink, which, Walter said, never existed elsewhere. It has also meant listening to the wisdom of people such as the local staff in Harbin, in China’s northeast, where winters are long and bitter.

The first time I went there in the winter, the team said, Have you ever had a warm ginger Coke?, and I said, I’ve no idea what you’re talking about! he recalled. And I heard from every grandma and mom, if you’ve got a cold, you heat up Coke in a kettle, slice some ginger, and it’s the most magical thing you could ever have!

After noting that hot ginger Coke sold for a premium at public events like Harbins famous winter ice sculpture festival, Walter and his team decided to get in on the act: We’re going to launch a commercialized, packaged ginger Coke product. It can taste fantastic cold and you can drink it warm! he chuckled. So we also know there’s an opportunity to take our core brands, and in an authentic way, based on preferences, try to meet the Chinese consumer half way.

Other possibilities, he said, include developing new brands which might be on e-commerce only. In a technology-obsessed country, where 900 million to one billion people now consume TV content on their phone and social media is highly influential, Walter said such new ideas are important. You’ve got to continue to try different things. We were one of the first companies to work with Tencent China’s biggest social media operator last summer, in embedding our brands in games, he noted.

Trust Is Built in Real Leaders

More than ever, he added, the key is to trust consumers, who are now the real brand managers The greatest authentic marketers of our brands now are real people so we encourage people to post vignettes online, create an experience they can engage with their friends and family on.

And new ways of engaging with the company’s other core group of people its staff are similarly necessary, Walter suggested. The company believes that people feel connected to doing something that serves a higher purpose, noting that Coca-Cola has funded 140 charitable Hope Schools for impoverished children in rural parts of China. And, to ensure that the company remains innovative, it is also important to take a different approach to younger employees, he added saying that Coca-Cola is testing the concept of a more balanced approach to Key Performance Indicators when it comes to assessing staff in creative areas of the business.

I do think, in a large multinational, those rigid type of KPIs can be very off-putting, especially for millennials, who are wanting to be in a more creative environment, he said. We need to have a model that is much more inviting to younger, more entrepreneurial professionals so we will experiment and see how it goes.

Yet as a leader, particularly in a place like China, he added, it is important to keep the pace of change in a company realistic.

Most companies, organizations and leaders have the desire to do more than either their company can afford, or the capabilities of the organization, he said. Because you can surround yourself with a very capable leadership team, but you’ve got the people four levels down who have got to implement that strategy and its’ their motivation or capabilities [that are key]. Sometimes we do it really well sometimes, it’s like, Boss we’re way off the rails on this one, you’ve got to dial it back, he added. So Id say this idea of focus and discipline, and understanding the pace, is one of the things that I work on most.

Dean Heukamp has addressed alumni, students and business leaders around Asia over the past week, at events in Tokyo and Hong Kong, and today in Singapore.