The war in Ukraine is taking a lot of the blame for high energy prices and inflation. But some causes go back further and won't end with a peace treaty. Which monetary and fiscal policies might best put an end to inflation, if not immediately, in the years ahead? 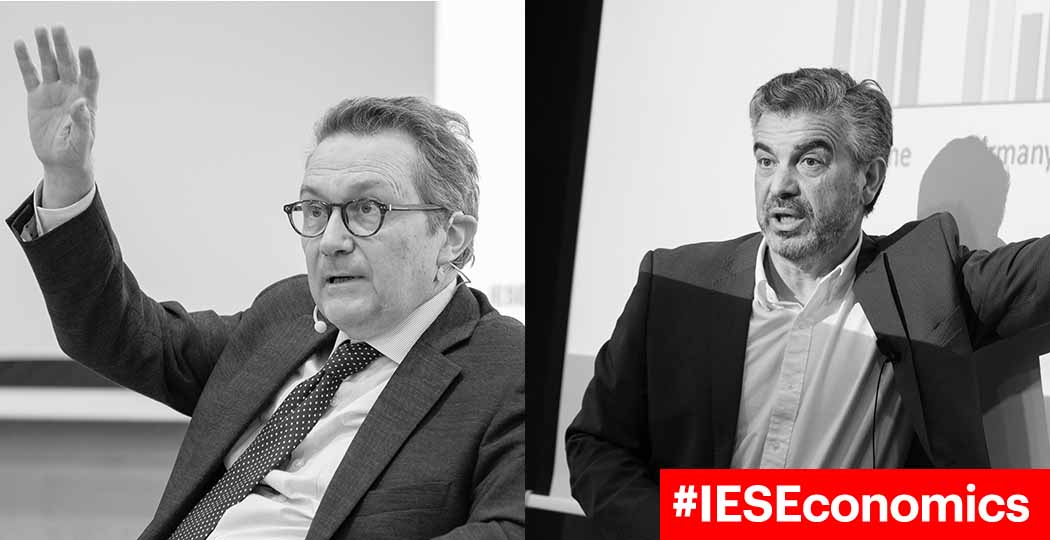 Professors Xavier Vives and Pedro Videla of IESE's Economics Department were invited to provide their outlooks for the economy and energy markets.

What might the war in Ukraine do to Europe's energy markets next? Which monetary and fiscal policies should we pursue for the future? Can we avoid stagflation? These were some of the questions addressed by IESE professors Xavier Vives and Pedro Videla in a session for members of IESE's Alumni Association on the outlook for the economy and energy markets as the war goes on.

Vives pointed out that energy prices began to climb before the war in Ukraine, due to the simple math of supply and demand. Starting with demand, the pandemic recovery revived global energy needs — in particular for Asia and for liquefied natural gas. In addition, a cold winter and hot summer heightened this past year's energy requirements.

On the supply side, Vives pointed out, there has been a significant increase in both natural gas and carbon dioxide prices (to transition to greener energy, some industries must pay for CO2 emissions). Some of that increase is due to the war, and some not. Additional meteorological factors, such as a lack of wind, increased the price of wind energy production. Disruptions, such as bottlenecks in the supply chain, also occurred. "To all this we must add another more complicated factor: the market power of some producers, such as [Russia's] Gazprom, which had already begun to restrict supply before the war," said Vives. Finally, green transition policies have, naturally enough, decreased investment in fossil fuels.

On the bright side, Europe already has 85% of the gas reserves it should need to get through the winter and the release of U.S. reserves should make the pricing situation more bearable. In Spain, on the other hand, "the Iberian exception" limits the price of energy, although "this mechanism will have a cost," Vives warned.

In any case, "the increase in energy costs has contributed to inflation, especially in Europe, which is less self-sufficient than the United States in terms of energy."

For Videla, "the current situation is reminiscent of the 1970s" for three main reasons: war has disturbed supply and increased commodities prices (then the Yom Kippur War, now Russia's invasion of Ukraine); the U.S. Federal Reserve has increased money supply considerably; and there's a Cold War underway (the new one between the United States and China, with considerable uncertainty).

To try to control the similarly stoked inflation back in the 1970s, Arthur F. Burns, as chair of the U.S. Federal Reserve, raised interest rates "but not enough to make them positive in real terms," Videla explained. His successor, Paul Volcker, managed to do what Burns didn't. "The result was the biggest recession in the world up to that time," recalled Videla. Emerging markets were especially hard hit: in Latin America, the 1980s are known as the lost decade.

Back then, the U.S. debt-to-GDP ratio was no higher than 40%. In the subsequent decades, facing a series of demand shocks (a dotcom bubble, a housing bubble, a pandemic...), debt levels are above 115% GDP. In Videla's view, today's inflation will not end with the end of the war, but when the money injected into the system has been eliminated.

If this is the case, what should Jerome Powell of the Federal Reserve and Christine Lagarde of the European Central Bank do? High levels of indebtedness lead Videla to think that rates will not be raised too sharply. Let's see why.

There are few options to reduce high debt levels relative to GDP: 1) increase GDP, which is hard to do if there's stagflation; 2) make fiscal adjustments by way of raising taxes; 3) default, which would mean the end of the European Union; and 4) maintain inflation without raising interest rates too much. Therefore, in Videla's view "five to 10 years of inflation hovering around 3-4% await us, which could allow us to eliminate the serious debt problem."

Vives concluded the session by emphasizing that we are facing great uncertainty and, given this situation, "we can only advise diversifying: in energy suppliers, in export markets, in terms of currencies," and so on.