The Importance of Listening to Your Audience 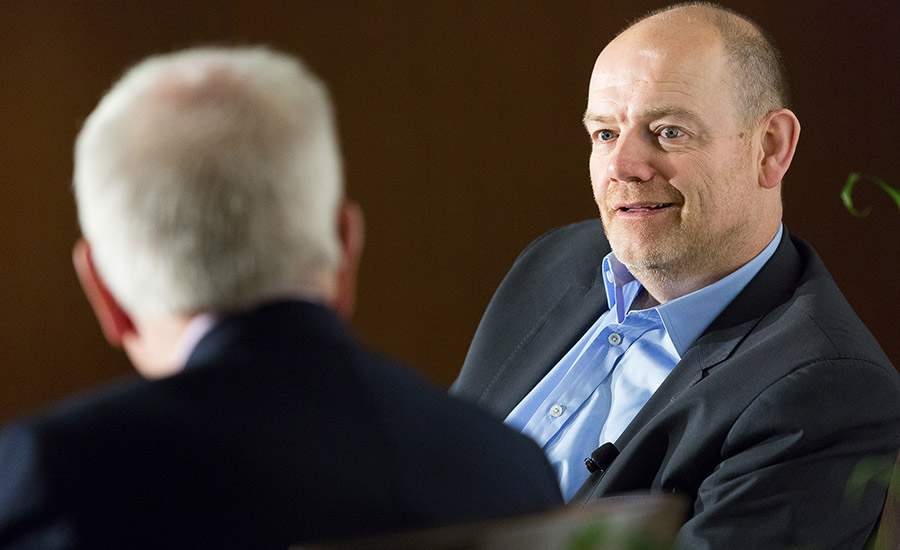 The ability to listen and respond to your audience may be the secret to enduring success in two sectors so often at odds of late: politics and journalism.

That according to Mark Thompson, CEO of The New York Times, who spoke on the New York campus this week, discussing how the paper is adapting to the changing political and cultural landscape of 2017 and sharing his insights into the shifting language of politics.

The question of what great journalism consists of is changing, Thompson says, as 140-character tweets begin to take center stage over traditional forms of journalism. Such changes require a re-evaluation of traditional industry processes, including the -brilliant but extreme- process of editing at theTimes.

Even as such processes are reconfigured, Thompson is confident that the quality of serious journalism will not falter. “Our current leadership in the newsroom are more committed to doing the right thing than at any point in the great history of the Times,” he says.

With this shift away from traditional processes comes an increased focus on the voice of the reporter. In the past, the Times consciously homogenized its voice, but in recent years the paper has realized that audiences connect more to individual reporters and pivoted its strategy.

The success of The Daily, a daily podcast from The New York Times hosted by Michael Barbaro, is a case in point. Engaging with an individual reporter’s voice and reaction adds texture to print journalism, Thompson says. “What it is to sound like TheNew York Times is different now than it was 20 years ago,” Thompson says. “But it many ways it is better – richer, deeper, and more real.”

In both journalism and politics, listening is key, Thompson says. Readers, Thompson says, have an emotional and intellectual relationship with the news publications they read.

The Times’ decision to launch The Morning Briefing, a digestible summary of important news stories that readers can access on their smartphones as soon as they wake up, is an example of an effort to incorporate news into the fabric of peoples’ daily routines.

As it is in journalism, so it goes in politics. “In those big, noisy rallies, you could see Trump experimenting, listening, learning and adapting – and getting closer to his audience,” Thompson says.

Hillary Clinton had a brilliant command of logic or logos, but struggled to cut through to the emotions of her audiences. Trump very clearly used language to target his audience’s pathos and ethos, Thompson says.

Short and Simple Wins the Race

The short, compressed words and phrases that Trump uses to connect with his audiences may seem like a new phenomenon. But according to Thompson, language of this sort has been used by leaders for centuries.

Thompson refers to this type of language as “parataxis”. While Trump’s ability to present this language on a platform like Twitter is new to the 21st century, the impulse itself dates as far back as Julius Caesar, known for pronouncements such as: Veni, vidi, vici. (I came, I saw, I conquered.)

The reason for its success in today’s political and cultural climate, Thompson says, is that the language of mainstream politics is no longer working. “Many people simply do not believe what the mainstream politicians are saying anymore.”

This is not to say that this type of blunt, often logic-less language is inevitable. Rather, Thompson believes that we can solve this crisis of trust by re-invigorating serious political discourse.

Thoughts for the Future

Moving forward, it is more important than ever to listen to our counterparts – whether that be publications to their readers, politicians to their audiences, or individuals to their ideological opponents. This applies not only to journalism and politics, but also to the debate surrounding politically correct speech.

“The idea that we can stamp out racism by never allowing racist speech is a demonstrably failed plan,” Thompson says. “Having the courage to talk out loud and to debate for what we believe in is a better path.”

In the end, rhetoric is not about shouting, nor is it necessarily about compromise. Rhetoric is about opening your ears and listening to the other side, he says.