5th Women in Business conference looks at diversity and inclusion, progress and setbacks 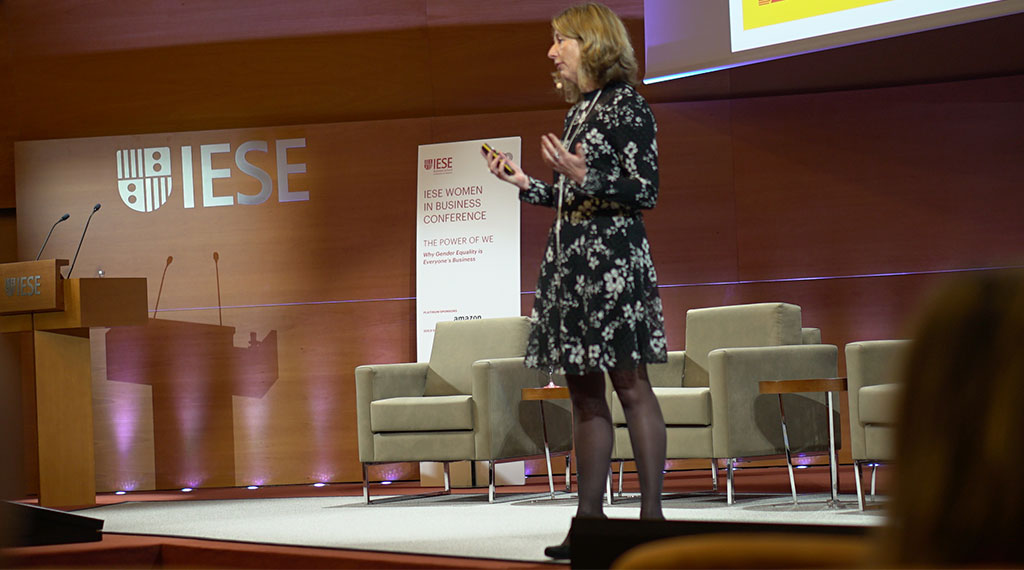 “You come up with much better results if you have a team with people who are not like you,” said Sabine Mueller of DHL Consulting.

While few doubt the advantages of a diverse workplace, gender parity across organizations has proven stubbornly difficult to achieve, putting new demands on companies and their leaders to spearhead change.

“You as a leader have to push the change. You have to role model the change,” said Sabine Mueller, CEO of DHL Consulting and a keynote speaker at IESE’s 5th Women in Business conference, a yearly event on the Barcelona campus organized by MBA students. The theme of this year’s conference was The Power of We: Why Gender Equality is Everyone’s Business.

A number of speakers commented on the fact that, decades ago when many companies started to pay greater attention to diversity issues, they thought it would be relatively straightforward to resolve through intentional policies.

But that has not proven to be the case. Even in companies hiring the most women, their numbers thin as positions gain in seniority. The diversity conversation has expanded beyond gender and ethnicity to include other issues such as ageism and disability. And the gap between diversity – being hired by an organization — and inclusion – feeling truly part of that organization — has become patent.

“You can measure diversity, and anything that you can measure you can then mandate,” said Santiago Solanas, Cisco’s Vice President for France and Southern Europe. “When we go to inclusion, it’s a different story. Inclusion is much more subtle than diversity.”

“It’s a pity that we’re still talking about this in 2020,” said IESE professor Mireia las Heras. “But we are making progress.”

Speakers noted that gender bias begins with the very first moment of contact with potential employees – the wording of job descriptions. That has prompted some companies to overhaul their hiring processes, changing job descriptions so that women are more inclined to apply, making blind CVs, training interviewers on their unconscious biases in favor of male behaviors, and altering the composition of interviewing panels to include at least one woman.

As the hiring process continues, managers must guard against their natural inclination to hire a “mini-me,” Mueller added. “You come up with much better results if you have a team with people who are not like you,” Mueller said. This carries over long after hiring, through creating teams that welcome dissent and truly listen to differing points of view.

From diversity to inclusion

But even companies that have been successful in hiring diverse employees have found that retention can remain an issue. “You can attract diversity into your organization, but if you don’t make them feel comfortable you’ll lose them,” said Frances Light, Global Director of Diversity and Inclusion at gaming company King.

That requires re-thinking many parts of the organization, from the physical spaces where people work to the behaviors that are rewarded. If not, even the best-intentioned policies may fail. Echoing Peter Drucker’s infamous saying “Culture eats strategy for breakfast,” Marc Grau i Grau, a research fellow at Harvard Kennedy School, said: “If the culture is stronger than the policy, the culture always wins.”

Increased flexibility, or giving employees different options for their different circumstances, is part of the shift away from rigid office cultures. That includes options such as job sharing, sabbaticals, compressed four-day work weeks and working from home.

But as Grau points out, flexibility is not the same as constant availability. If employees are given the option of teleworking but then are given unreasonable workloads or are expected to be online 24/7, it’s a step backwards rather than a step forward.

To address this, in Europe PepsiCo recently started an initiative called the One Ask initiative, which allows employees “to make one personal or professional request per year to make your life simpler,” Tsvetinskaya said. “It lets employees design their employee experience.”

All diversity efforts require the commitment of everyone in the company — from top management on down — as well as governments and industry organizations. “When you’re trying to shift the dial on inclusion and diversity it’s not something you can do alone,” Light said.

It’s also not something that has a quick ending. “We are on the journey. We try new things. We are not finished but I don’t think we ever finish,” Mueller said.