“The institutions of democracy could be gone in one generation” 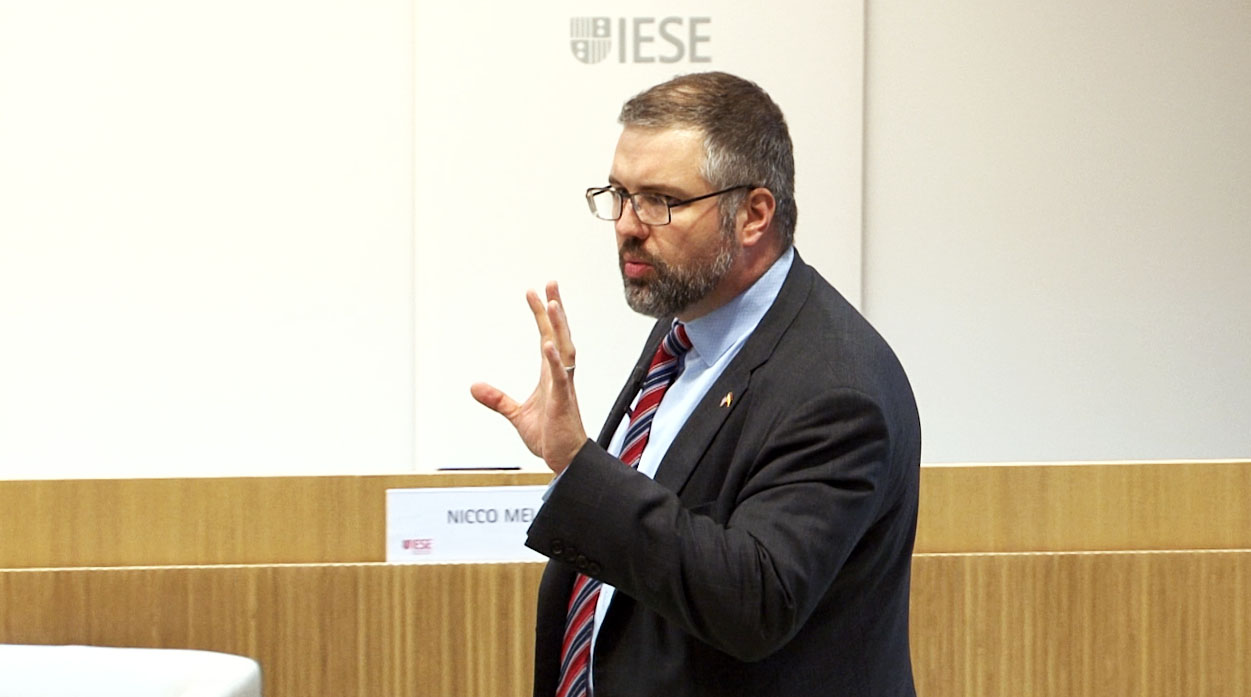 Author and academic Nicco Mele speaks at a Center for Public Leadership and Government event on the Madrid campus.

When George V acceded to the British throne in 1910, it was inconceivable that many of the world’s monarchies would soon be swept away by the rising tides of movements such as republicanism, communism and fascism. At the beginning of the 20th century, monarchs took their status for granted, just as a century later, some assume that democratic models of government will continue to prevail.

Nicco Mele, former director of Harvard Kennedy School’s Shorenstein Center on Media, Politics and Public Policy, is not one of them. “We are living in such a moment right now; the institutions of democracy could be gone in a generation,” he said during an alumni event organized by IESE’s Center for Public Leadership and Government, together with the U.S. embassy in Spain.

Mele joined professor Pedro Videla to discuss how the digital era is eroding the traditional pillars of power, and the need for strong leadership, at the event on the Madrid campus this week.

One of the digital era’s most visible impacts on the erosion of power is in legacy media outlets. “After September 11th, most programming in the U.S. stopped twice a day for Mayor Rudy Giuliani’s press briefings. Some 15 years later, Keith Urbahn [a Republican staffer] tweeted to his 400 followers that Osama Bin Laden had been killed, bypassing journalists … This changes the nature of power in profound ways.”

But it’s not just that legacy media’s scoops got blindsided by digital platforms: they also ate their lunch. lt is estimated that advertising on Google’s search engine represents some 85% of its parent company Alphabet’s total revenue. It owns the largest billboard on earth, allowing it to “arbitrage the cost of advertising down to almost nothing,” Mele said. For example, reaching 400,000 people via a full-page ad in a paper-and-ink legacy media outlet might cost $10,000; Google offers reaching the same number of pairs of eyeballs for $16. “$40 billion of revenue has evaporated in 40 years,” he said.

It is perhaps understandable then, that Mele reported that there are now 21 states in the United States whose media outlets no longer send a dedicated correspondent to Washington D.C. As a result, their senators might serve out their six-year term without much media scrutiny. “If you live outside the top five largest cities in the U.S., you live in a news desert,” he said.

The danger of junk news

So what can be done to talk back to fake news and what should the titans of Silicon Valley do? On one side, Mele suggested that there may be opportunities to change algorithmic platforms to surface quality news. But on the other, attempts to create an algorithmic solution to measuring truth in online content have proven problematic.

History may provide another perspective on the erosion of power in the digital era. The year after George V’s accession, the U.S .Supreme Court ordered the break-up of Standard Oil on anti-trust grounds. Since data is the new oil, should regulators seek to break up Facebook or Google?

“I don’t believe in breaking them up,” Mele said. He pointed out that anti-trust legislation may have limited applicability to “free” products. Instead he proposed leveraging the common law principle of “duty to deal”: companies have an obligation to share technologies required by competitors. For tech companies, this would mean opening up the data flows. Legislators also need to stunt their growth, by addressing the “kill zones” around the tech giants whereby they suck up potential competitors. “There should be a temporary moratorium on acquisitions.”

On top of that, tech companies need to open up about their challenges. “I think we need much greater accountability … Platforms are opaque and they are also opaque about their problems, like hate speech … The EU is leading the way here; the GDPR is not without problems but it is a major step to bringing greater transparency to platforms.”