Pablo Hernández de Cos, governor of the Bank of Spain, at the 14 Banking Industry Meeting Photo: Javier Arias

Strengthening their reputation while avoiding undue risk. Staying profitable without relaxing credit standards. Accelerating the sale of non-performing assets. Leveraging new technologies. And, above all, winning back the trust of clients.

These are some of the principal challenges facing the banking sector today, Bank of Spain Governor Pablo Hernández de Cos said during the opening of the 14 Banking Industry Meeting on the Madrid campus. The annual meeting, organized by IESE-CIF in collaboration with EY, gathered Spain’s most influential and global bankers, along with the sector’s top regulator.

Hernández de Cos noted that the sector’s reputation remains weak, and that complaints by clients increased six-fold from 2014 to 2017. “Institutions must adopt a very active attitude in developing a strong culture aimed not only at complying with transparency standards with clients, but also fundamentally at understanding and satisfying (client) needs,” he said.

Hernández de Cos welcomed regulatory changes being prepared by the government, including the creation of a new overseeing agency that will help prevent and mitigate systemic risk. The Bank of Spain will have new authority in controlling the granting of credits by banks. “Spain was one of the few European countries that still did not have a national macro-prudential authority,” he said.

The “big tech” threat
Furthermore, the governor affirmed that in the new competitive environment, the great challenges for banks are new technologies and increasing financial disintermediation. In this new framework, both “big tech” (Google, Apple, Amazon, among others) and fintech (techno-financial companies) are altering some of the traditional paradigms of retail banks.

While existing banks enter the fray with some initial advantages, “they also must react so as to take advantage of all the opportunities offered by the new situation.” For Hernández de Cos, the response of financial institutions could be anything from specialization to digital transformation – always mindful of the importance of information management. “In any case, this transition will be accompanied by an increase in costs in the short term in a low-profitability environment,” he recognized.

“Technology platforms are a true threat to the banking sector,” professor Jorge Soley said in reference the emerging competitors. “The banking sector has always survived, but not every bank. It’s time to review and implement strategies and policies.” The professor said he’s convinced that fintech could become “allies” of the traditional financial system.

For his part, professor Xavier Vives highlighted that banks could “cooperate or specialize in products that could not be offered by others.” One of the strengths of traditional banks, he said, is in its data processing security and its experience in complex financial regulations.

The future is in the data
For his part, BBVA CEO Carlos Torres said that the great challenge for the banking sector “is to know how to leverage technology to generate and provide value for the client. Data is the key to the future competitiveness of banks.” For Torres, banks must maintain the trust of clients in order to have full access to their data.

The CEO drew attention to the importance of the role played by technologies such as biometrics, cloud computing and artificial intelligence to the future of the sector. In this context, the objective becomes “placing the opportunities of this new era within the reach of everybody, and this is the path to follow.” 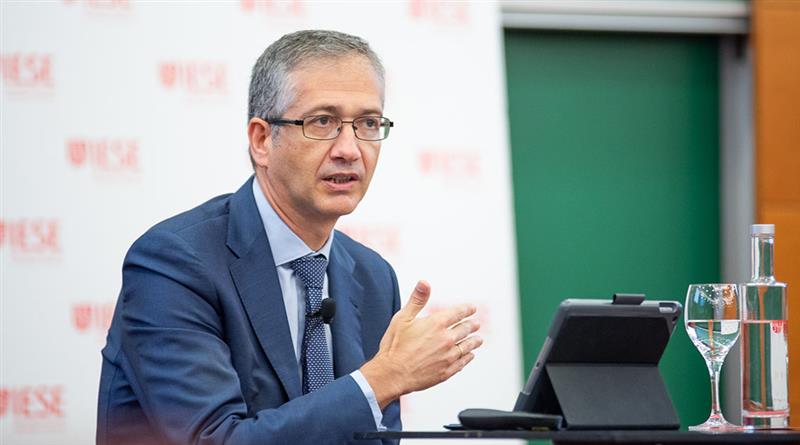